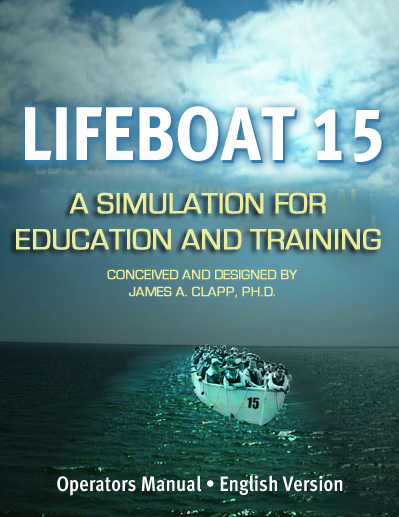 For more information, or for purchasing a copy of Lifeboat 15  (   Operator’s Manual,   Player’s Manuals, and   Discussion Questions & Questionnaire, and simulation equipment. ) contact UrbisMedia at 619.260.1572, urbmedia@mac.com

Lifeboat 15 is a simulation designed to be used for a variety of instructional, training and organizational development purposes.   The elements of the simulation have been fashioned to mirror aspects of modern urban society, including such general features as decision-making under scarcity conditions, cooperation and competition, risk-taking, the moral and ethical dimensions of decision-making, and considerations in the “rational” distribution of finite resources.

Over the past 25 years, in the U.S. and Hong Kong, the simulation, which runs from 2. to 2.5 hours, excluding post simulation discussion, has been “played” with dozens of graduate and undergraduate students in Public Administration, Urban Studies, Political Science, Economics, Education training and Educational Administration, and employed as a facilitation element in conferences.  It has been favorably reviewed by the journal Education & Games. A version has been translated into Chinese.

The simulation employs “roles” that reflect a social cross-section of society. It is not a role-playing simulation per se, but allows “players” to infuse various social roles with their own values and interests.   The roles place participants in a social context, in some cases providing for greater power or influence over decisions, in other cases placing constraints and limitations, in ways that are roughly analogous to privileged, underprivileged and disadvantaged segments of society.

The simulation is designed to raise issues of rationality, morality, democracy, as well as mirror substantive social concerns such as those related to Environment, Health Care, Urban Planning and Development, Education, Economic Development, and Democaracy, as well as expose various ways in which groups build teams and alliances to address these concerns.  “Players” must make decisions and allocate resources in order to avoid “storms” that could imperil the entire boat.  They may undertake to “lighten” the boat in various ways, but all decisions entail costs and risks.  The simulation is controlled by the Operator (“Dr. Fate”) who ensures that time is kept, decisions remain within the rules of the simulation and that relative calculations are conducted according to the Probability Tables contained in both the Operator’s and Players’ Manuals.

Lifeboat 15 is an exciting educational simulation that contains “risks” ranging from anarchy, to “shark attacks,” to armed rebellion, but also allows for rational decision-making, democracy, and social cooperation.

Lifeboat 15 contains 2 Operator’s Manuals, 17 Players Manuals, players badges and “identity cards,” a die for “rolling” for decisions, resource chips, and relevant “props.”  Play requires at least 15 “players” (four roles are gender alternate), 15 chairs, and preferably a large open room for the construction (with chairs) of the “lifeboat” and any size audience. 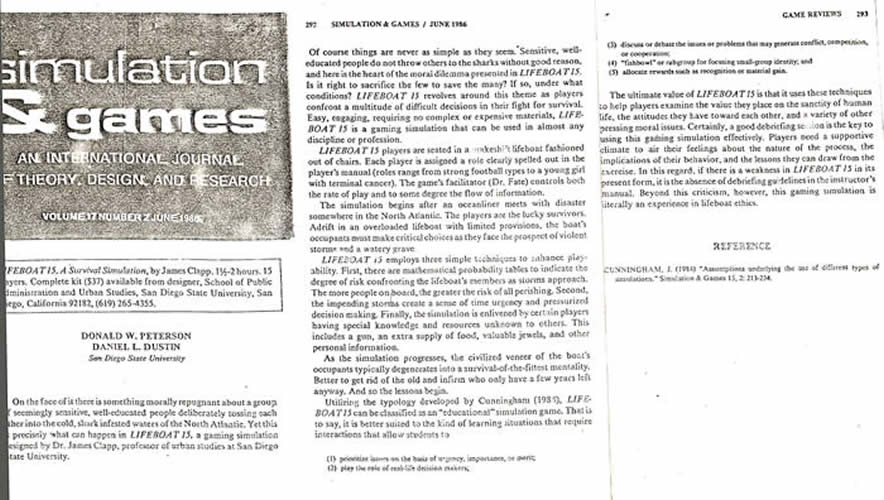