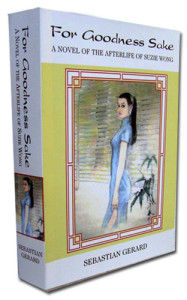 Movies, it is often said, require of their audiences a willing suspension of disbelief. They are, at least where pure fiction is concerned, the domain of the romantic, not the rationalist. Movies are about life as we might wish it to be, or even wish it were not; but they are life reconstituted life first analyzed, synthesized, and imagined into art. So says Marco Podesta, an American professor of Urban Studies and movie aficionado visiting Hong Kong, whose boyhood infatuation with a beautiful Chinese movie actress is unexpectedly reawakened when he steps aboard a harbor ferry. Thus begins an experience that causes him to ponder the relationship between life and movies. If real life is the necessary precondition to reel life, then what happens to that life after the movie is over, after the couple that meets and falls in love on screen walks hand in hand into the sunset as the music comes up and the credits begin to roll. That s what happened when William Holden and Nancy Kwan completed their roles as Robert Lomax and Suzie Wong in the 1960 film, The World of Suzie Wong. Holden and Kwan went on to other roles as other characters; but Robert and Suzie faded into the landscape of our suspended disbelief, forever walking hand in hand into that Asian sunset. But what were the afterlives of the Robert and Suzie who were their inspiration? That ferry ride might have just been another deja vu, had not Podesta stumbled upon a mysterious painting of a captivating girl in a gallery window in old Hong Kong. It is a painting by a man who calls himself, who thinks he is, or who might even be, Robert Lomax, ; a painting that obsesses Podesta and threatens his own newfound cross-cultural love, and brings new friendship from unlikeliest of sources. Podesta s search leads us from the inner sanctum of the Hong Kong Club, to the politics of the university, from the glitter of Central to the gritty streets and lanes of Sheung Wan and the gaudy bars of Wanchai. It is a quest that brings a reverie of his bloody days in Vietnam, revives a capacity for love that was tragically stilled in the streets of Paris, and puts his own East-West romance to the test. Beneath the reflections and refractions that are the neon-illuminated surfaces of Hong Kong are exposed the meanings of the city through the lenses of an urbanist. But it is also the perspective of a man who loves a city that will not requite that love, a city that, on the eve of its handover, is pledged to another. Yet it remains for him the urban expression of Suzie Wong, the captivating captive of her fate, self-deluding, enchanting, and never quite what she seems. This is a story that is as mysterious as a narrow Hong Kong lane that leads to courtyard, to a murky staircase. It is a story that is eventually unraveled by a woman who learned that not just movies, but life, too, sometimes requires a willing suspension of disbelief. For Goodness Sake is the story of a iconic movie, an exotic city, an enchanting girl, and a man who fell in love with all of them.

For information on how to order a copy–autographed, if you like–write to sebastiangerard@mac.com or request a copy using our contact form.  It is also available from  Amazon.com